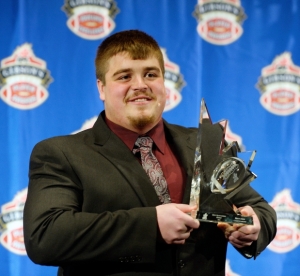 Brett Jones receiving his 2013 Rookie of the Year award

Per reports, the Giants are expected to sign the Canadian Football League’s (CFL) Brett Jones.

The move is most likely to bolster a Giants offensive line that was a victim of many injuries to it’s starting group a season ago. It will be seen what the Giants plan on doing with lineman Justin Pugh, J.D. Walton, and Weston Richburg as plans were made early into the offseason that the Giants would shuffle their line. Plans were made to move tackle Justin Pugh, to center and we will see how the addition of Brett Jones will affect the line.

Most Likely, Brett Jones will be used for depth but, as training camp arrives in the coming months, Jones could impress and alter the Giants plans on their 2015 offensive line as he competes for a starting job.

In addition to the Giants, Jones had worked out for the Eagles, Steelers, Cardinals, and Buccaneers.