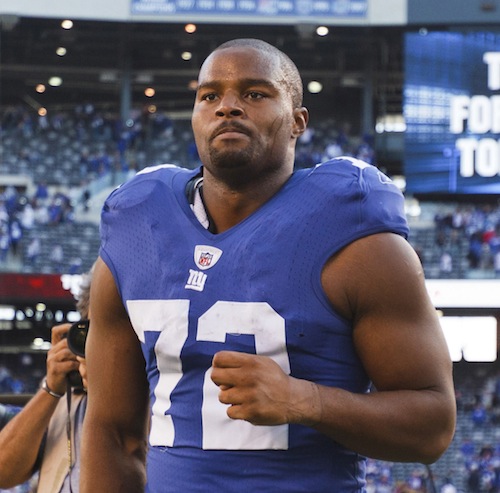 BREAKING: (via ESPN) Osi Umenyiora and the New York Giants are discussing plans sign a deal so he can retire as a Giant.

Osi Umenyiora, 32, was a long time defensive end/ linebacker for the Giants who helped the club triumph in two Super Bowl victories.
The two-time Pro Bowler was drafted by the Giants in 2003 and played along the side of Giant great, Micheal Strahan.

Umenyiora has accumulated over 80 sacks against QBs, 435 tackles, 2 touchdowns, 35 forced fumbles, and 1 interception. Along with these impressive stats, he has also received the NFC sack leader award in 2005.

Umenyiora is an all time Giant that can provide depth and experience to an inexperienced defensive line. The arrival of Umenyiora in town could provide the Giants an edge that not many players are able to provide due to his experience not only with the Giants, but defensive coordinator Steve Spagnuolo. Big Blue nation should welcome #72 back with open arms and hope this deal gets done. Hopefully Giants fans will soon be able to wear their old Giants Osi Umenyiora jersey back into the stadium, without getting weird looks.

Are you happy Osi Umenyiora may retire with the Giants?

1 thought on “Osi Umenyiora Back In NY?”